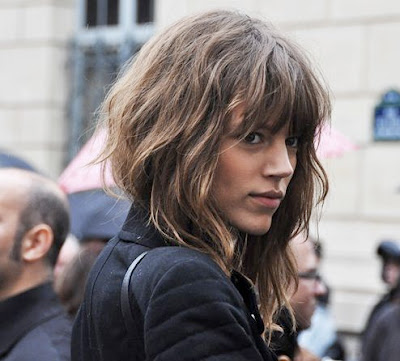 When I moved out of LA almost three years ago, I wasn't under any illusions about making certain conversions easily -- doctors, markets, finding a new car wash... I seem to do pretty well with the big moves (agrees with the gypsy in me) but these other kinds of changes stupefy me. Like finding a new hairdresser.

Truth is, I haven't been inside a hair salon in ages. When I lived in NYC, I had Florence -- hairdresser extraordinaire, introduced to me by friends. She-would-come-to-your-apartment. To-cut-your-hair. So my friends and I would pick a date, convening usually at my place because the location was easiest for everyone, and we'd make a little party out of it.

The one thing I was aware of early on was that Florence had only recently taken over for someone named Brigitte when she moved to LA. (Both are from top salons, by the way.) So lucky me, when I returned to LA after my stint in NYC, yes, easy, I knew who my hairdresser would be. It would be Brigitte. And she’s been cutting my hair ever since.

When I got to my new town, I had no immediate intentions of trying to replace her so I decided I’d just make the hour and a half trip back to LA every few months to get myself a cut. I made it her way twice in two years. Horrendous. But -- the thing I discovered about getting a decent cut in the first place is that it tends to grow out pretty decently as well. So what might start out as a shoulder length, slightly layered bob (what I’d get)… later can evolve into a longer, flowing deal that still has shape and layers, and looks pretty intentional. It has happened numerous times that after going months and months without a cut, my hair continuously stowed away in a pony, bun, or braids, that when I do ever let my hair down, people think I got my hair cut. In a new style. Recently.

Which leaves me with the only upkeep I’ve really needed to concern myself with -- that of trimming my own bangs. And Brigitte showed me the way to do that years ago.

You hold the scissors vertically (pointing toward the ceiling -- keeps the bangs more wispy) and then you do little snippets across your DRY bangs until they're how you want them.

I try to remember to put my contacts in first for a little added precision.

But truth be told, it’s actually harder than you’d think to mess up bangs. I’ve done them too short for sure and sometimes a little crooked. But if you muss them up a bit with your fingers afterward you can usually get away with them. And, if not, I find that ten times out of ten, they grow back. It's how the whole thing was designed.

Meanwhile, nine months have gone by so far this round that I haven’t been down to see Brigitte, during which time she moved back to NYC. She did promise she’d be on the West Coast for the holidays though, which is excellent news since they're coming up and I won't need to fly all the way to NYC to get my hair cut.