Musing -- The Shelf Life Of Books 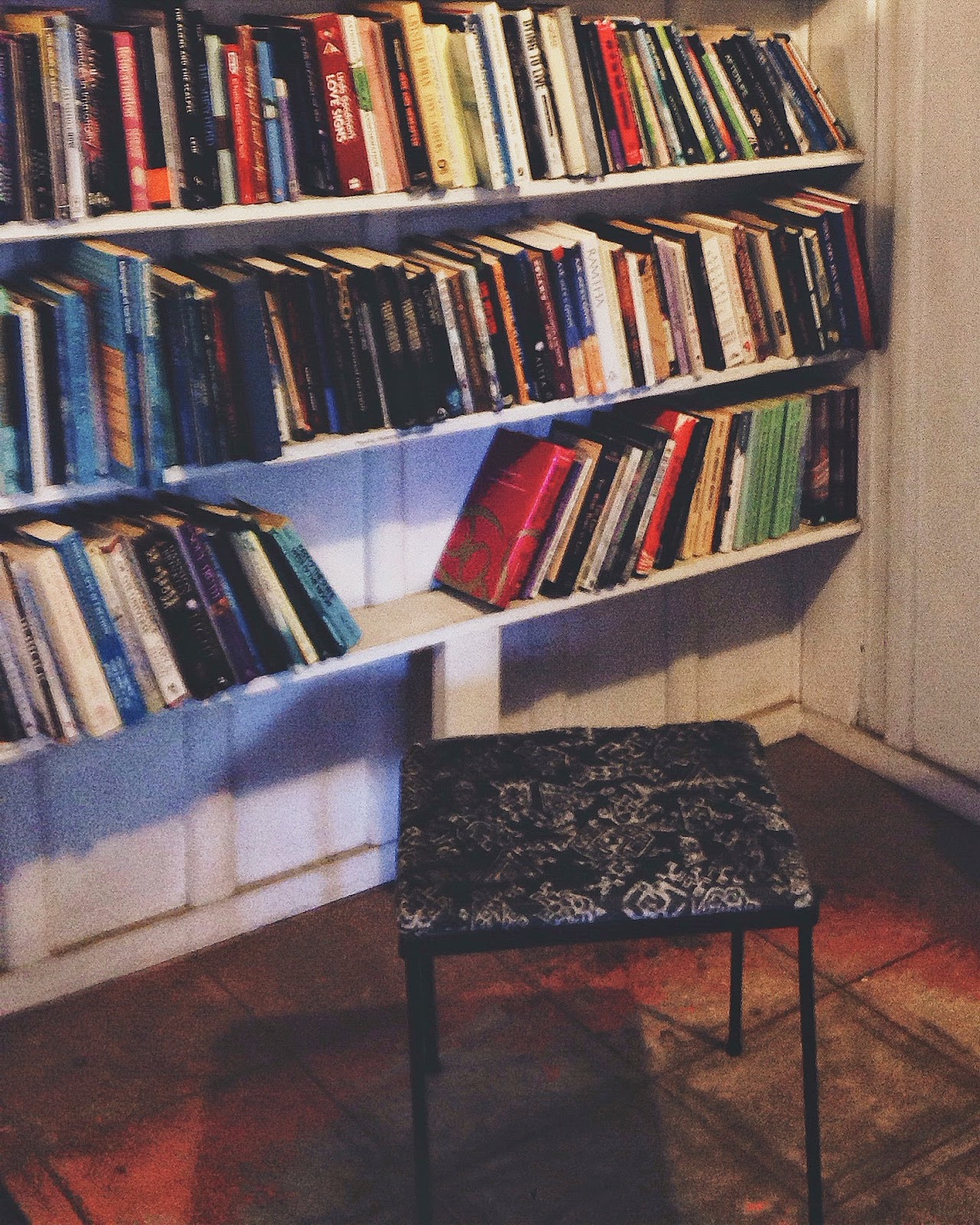 Recently, we were looking to clear out some extra space in our house. One of the endeavors was tackling the bookcase and weeding out what could go into storage and what could go -- away away.

It was fun taking a little ride down my reading memory lane. I can literally remember the things I was going through, my particular interests, or what I was setting out to accomplish at the time, by the books I was gobbling up.

A few books from my childhood, such as Six Plays by Henrik Ibsen featuring A Doll's House (yes, this was the type of thing I loved reading as a kid). I was very fixated on dialogue, which propelled me to write little things for extra credit for school, such as Ronny And Julie, a modern day Romeo And Juliet that I turned in elementary school. Other faves from kidhood that I got to pass on to my own kiddos -- Florence Nightengale, Born Free, and a collection of poetry called Hailstones And Halibut Bones (that my son chose to recite from for a class assignment last year, sigh). I also managed to bestow them with an oddly well preserved pop-up book of knock knock jokes that I can still quote from (Knock Knock -- Who's there? -- Toucan -- Toucan who? -- Toucan live as cheaply as one).

Weighty (actually, bicep heavy) required reading from college. Milton, Dostoevsky, Chaucer, Shakespeare (obvious English major here). Post-college, the classics continued to invade voluntarily with Therese Raquin by Emile Zola, Salinger's Franny and Zooey, and Madame Bovary among the tops. Inspiration for the craft of writing itself and screenwriting also took up some shelf real estate, starting with Strunk and White The Elements Of Style...

Then there were the happened-upon books that I would grab up. Something on a favorite artist like Egon Schiele, or a collection of drawings by Pontormo, or a well-worn how-to book on speaking French that I would flip through every so often in an attempt to justify the four years I studied it unsuccessfully in college.

Of course, every girl needs a trusty Self-Help section, and mine sprouted during my single NYC days. The Seat Of The Soul by Gary Zukov, A Traveling Companion by Joseph Conrad, Chopra's Perfect Health, Creative Visualization and Living In the Light both by Shakti Gawain, all crescendoing to Man's Search For Meaning by Viktor Frankl. I still consider all of these the real deal. Invaluable at any stage of life.

My most recent collected books (not counting cookbooks) have been for the most part non-fiction. (I've heard this happens. At some point, you only want the facts.) For me, it's been memoirs and biographies in the realm of Julia Child My Life In France, Tina Fey Bossypants, A House In The Sky by hostage survivor Amanda Lindhout (an incredible story but I can't say that I recommend it as it left me feeling traumatized for months), as well as books of essays by various writers.


Almost all of these books that I have held onto (literally and literally, as I still like holding onto a book and turning pages the old-fashioned way), I've decided I have no intention of parting with for anything more than a temporary stint in storage. I can recall certain take-aways from each one (will share a few gems later), and sometimes can even feel re-inspired just by looking at certain covers.

"If you read a book and get even one thing out of it, it was worth reading." -- my father

Go forth and read!


photo snapped on a visit to wonderful bart's books in ojai
Posted by The-Pastry at February 19, 2015

Please be so kind as to check 우리카지노 with the beginning bit about “Lady Luck” and likelihood. Roulette tables obtainable in} various sizes, but that standard dimension is round four by eight toes. Dual tables are double-sized and feature two Roulette wheels.